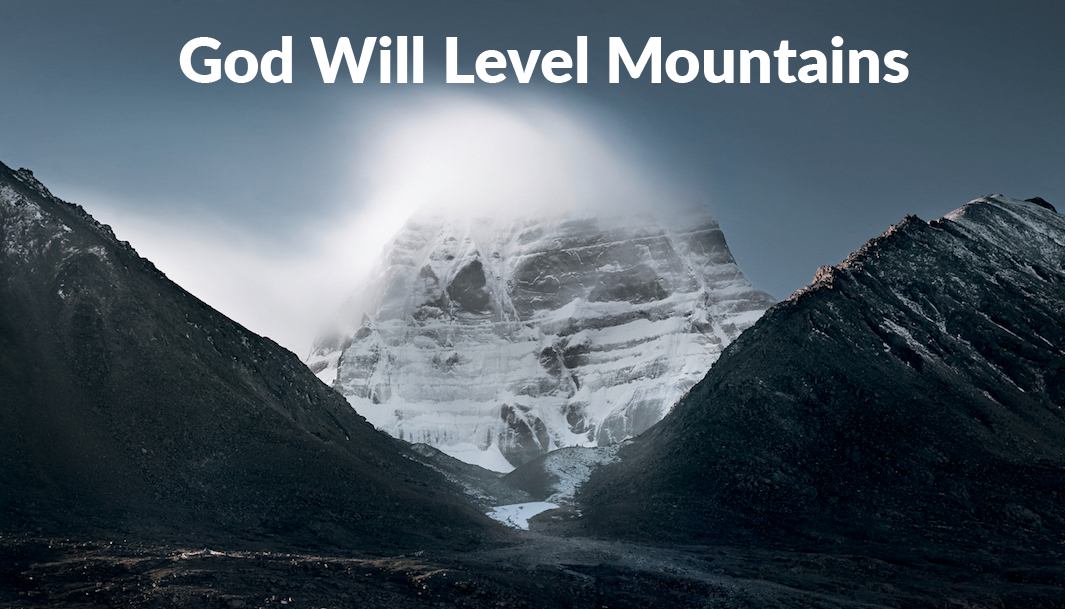 ACPE’s Word for 2005: GOD WILL LEVEL MOUNTAINS, (Plus) Word for Colorado, California, and Oregon

by the Apostolic Council of Prophetic Elders
C. Peter Wagner, Cindy Jacobs, Chuck Pierce and others

Word of the Lord for 2005
Apostolic Council of Prophetic Elders

Two of the variables are:

We are moving into a season of tremendous revelation.  There will be an increase upon the revelatory gifts, mixed with the teaching gift, to release keys to see nations reformed and transformed.

Revelation will also manifest in the area of keys to release finances and wealth.  Isaiah 45 will be of major importance as a passage to see breakthroughs in these areas.

It is a time to form new relationships and strengthen those you have walked with for many days.  Covenantal relationships will work together in new ways. As Joseph re-distributed seed, in the days of crisis, the Lord will re-distribute wealth.  Great networking will take place between Christian ministries and many will turn their hearts to the poor.  Great funds will be given such as the release in the past few years of one billion dollars to the Salvation Army.

The African American Church in America will see a rising up of some leaders and a putting down of others based on where they stand on justice and righteousness.

A Season Of Shakings

We are in a season of shakings.  Everything that can be shaken will be shaken.  There will be continued physical disasters where the plates of the earth will shift.  In the midst of these shakings, God will rise up regional apostles and prophets, who will be able to issue decrees, then see the natural disasters stop or be lessened in their city or region.

Much sin is going to be uncovered, including more homosexuality found in the church. Financial improprieties will also come to light.  Leaders will call for more accountability.

God is moving in the earth.  We are entering a decade in which we will see one of the greatest harvests of souls the earth has ever experienced.  With this will be a tremendous outpouring of signs and wonders.  Prophetic evangelism will be on the rise with signs and wonders accompanying – especially in the marketplace.  A tidal wave of God’s glory will come upon the church.

A revival will occur in the marketplace with apostles rising and being set in place who will be people of great influence in their cities and nations.  Apostolic leaders in the marketplace, who have been faithful, are going to be receiving promotions.  This will manifest in these leaders having significant business opportunities supernaturally brought to them without their having sought them.  It will happen with such frequency that these Apostles will have to develop teams to perform due-diligence in order to determine which of the opportunities they should undertake. The prophets in their spheres will also be involved in the project selection, once the due-diligence has been developed.

Generations And Broken Relationships Will Be Knit Closer Together

Angelic activity will increase.  Children will experience visitations of angels and proclaim this across the nations.  This will be a sign even to unbelievers.

A special season of restoration will take place.  There is an escalation of all things and this will manifests in a restoration of relationships that have looked impossible to mend.

Leaders will have a special emphasis on lineage and legacy.  The generations will be knit even closer together as one generation mentors another.  There will also be special mantles poured out upon new leaders as they rise up a new generation of giants like unto Oral Roberts for evangelism and Aimee Semple McPhearson for healing.

Stand Strong In The Vision That God Has Given You

New “Samuel” prophets will come to the forefront that will help nations and those with vision, transition “Saulish” nations to “Davidic” nations who will love God.  Prophets will be positioned to help national transformations and anoint new government leaders.

The Lord is calling us into a deeper level of intimacy with Him. God will release a new measure of grace upon His people who seek him.  With this release His people will thrive and flourish.  Those things that have been hard will become easy and stress-free.

The spirit of Jezebel will manifest in a strong way trying to persecute the prophets and leaders.  Stand strong in the vision that God has given you.  Don’t run from Jezebel.  Stand against her and she will be the one who will run.

Asian Prophetic Insight
One of the prophets from Asia had prophesied in October that a catastrophe was going to come to Asia that would result in a door that is open to harvest for the gospel.  He also saw that a pandemic would hit where 300,000 could die, if prayer and help was not sent.

England
We feel that Satan knows what an important nation England is for the re-evangelization of Europe and that as a result, he is marshalling his forces to try to discourage, destroy, and other wise stop the Christian leaders of England.  Pray for these leaders and for England.

Iraq
Iraq is a nation rich in biblical significance.  It is also a place where Satan has built his strongholds.  God wants to use Iraq to “crack open” the Middle East for an in-gathering of souls for the Kingdom.  For this reason we are calling upon the Body of Christ to pray for the upcoming elections.  A 21 day fast was called beginning January 15th through February 5th, 2005.  Special prayer is called for the soldiers of all nations and relief workers, as well as Iraqi nationals who are fighting to see democracy established in the region.  Pray to break the demonic powers of witchcraft and the occult that would bring discouragement. Bind the spirit of Babel that would bring confusion on the troops fighting for democracy.

United States
The United States has been saved from those who would remove God from its borders, but now the nation must be established.  There is a four-year window for the intercessors to war for the establishment of morality and righteousness.  God wants to rise up a president in 2008 who will reconcile the nations to the United States.  Bush has been called to be a man of war like David; however God is bringing a Solomon to office in 2008 that will make peace with the nations.

California
A dream was given to one of the prophets in November 2004 that everything began to fall apart in California.  In the dream he was helping to put Christmas ornaments back on the tree.  He knew then that he should warn the people that mudslides would come and that weather patterns would change drastically with snow.  An earthquake would follow at some time after these drastic weather pattern shifts.  There would be flooding in Los Angeles and then a fire.
Several of the prophets had received that this was a judgment due to the vote to use stem cells for research, which was passed in the last election.  The word was that they needed to re-align their gifts or the whole nation would be changed by the Jezebel spirit that will arise out of California. It would try to pass similar votes in the rest of the nation.  As a result, we are calling for massive prayer for Arnold Swarzenegger.  We strongly felt that the intercessors need to go for the ancient roots to heal the land of California.

Colorado
Colorado is going to see the beginnings of “unlocking” the treasures of darkness from the mines.  New veins of ore and minerals will be discovered in the ground that has been hidden until this season.

Oregon
Oregon will see the ruling governmental structure along with its influence and liberalism fall.  This will cause hidden terrorists groups to be exposed beginning this year.  Watch for physical shakings in nature so that spiritual change can come.

Singapore
God is going to use Singapore as an apostolic city-state to model the convergence of the church for those with philanthropic calls, both believers and unbelievers, to release compassion ministries throughout the nations of the earth.  Singapore is going to be a first fruit that God is going to use to bless the nations.  They will be a sign of the release of wealth.

Syria
There is going to be a revealing of hidden and secret things that will start in 2005 and continue into the following years.  God is going to reach into this nation to create openness to the gospel.

The World
The tsunami in South East Asia will cause the dollar in the economic structures of the earth to shift beginning in mid-June. A vision was given of God holding the spirit of Mammon upside down, while He shook the things it had in its pockets out for the Joseph’s of the world to take possession of.