50 State Tour
Alabama Statewide Gathering
Very Brief Overview
July 22nd-23rd, 2003
The Catalyst …
The 50 State Tour
Dutch Sheets and Chuck Pierce, both national leaders and mobilizers, sensed very strongly the direction of the LORD this year to pursue a 50 State Tour together for the purpose of identifying, mobilizing, joining, and aligning leadership, intercessors, and the Body of Christ across each state. In addition they strongly believe this to be a defining year for this nation. The expression of this gathering has varied state-to-state, and is often unique based on the distinct hindrances and giftings of the particular state in relation to divine calling. The Alabama gathering was extended to also host other national leaders including Jim Goll, and Dr. Negiel Bigpond (a Yuchi chieftain of the Creek Nation and Native American apostolic leader from Oklahoma, whose roots are in Alabama).
Alabama – Discerning the Possibility
In order to remind and inform us of the heritage and legacy this state carries, one of shame, yet also one of great promise and potential the following brief summaries were provided.
Alabama – Redemptive Gift and Call
Alabama – Brief History
Vision of Ezekiel
It was evident the LORD was connecting, joining, and aligning His people in a unique way – as in the vision of Ezekiel, bone joining to bone (individually, within cities, and within the state), breath and life being released, and a great army being mobilized among God’s people (Ezek 37:1-10). The diversity included leaders, intercessors, and congregations from across the state of Alabama – every race, every geographic area, every area of ministry and gifting, every denomination, even church leaders and state leaders (Chief Justice of the Alabama Supreme Court, Judge Roy Moore was with us Tues PM). It included civil rights leaders from Selma, and Native American leaders from Oklahoma, all gathering to pray and seek God’s face regarding the state of Alabama — much was accomplished, and much is before us. It was evident the LORD was pleased with the gathering of His saints in that special time for such a purpose.
Some Recurring Themes or Thoughts …
Justice and Injustice
A recurring theme throughout the two days, which was the LORD’s doing and not planned or intended, was regarding justice and injustice. Whether subjects of the primary speakers (all four of which ended up here), words of prophesy or exhortation, several things became very clear:

1) It is the LORD’s desire to redeem the reproach of the past in the state of Alabama.

2) It is the LORD’s desire, because of the reproach of the past, to usher in Justice to this nation through Alabama and the Deep South, for by this He will receive the greatest glory.

3) The injustice and atrocities of the past will actually become fuel to the fire the LORD kindles to usher in this Justice to our nation (Jud 6-7). Also, what has been a barrier will become a bridge.

In reflection, there was significant statements through the joining together of three leaders representing the three peoples/nations/races between whom the greatest injustice and atrocity has occurred in Alabama (White/European-American, African-American, Native American). In addition, there was reconciliation between Arab and Israeli believers present, and prayer for both Israel and the Arab nations (between whom the contention reaches back to Genesis).
Covenant at Gilgal
It is the LORD’s desire to establish and demonstrate Covenant in a powerful way through the state of Alabama – both with God, with one another, and with the Land. Alabama is like Israel at Gilgal, being circumcised again (the sign of covenant), and at Gilgal the “reproach of the past would be rolled away” (Josh 5).
The Gate Beautiful
Alabama and the Gate Beautiful came up repeatedly through the two days without much further comments (Alabama sometimes called, “the beautiful”). In reflection, this was the Gate to the temple where the lame man was made to walk, and where Peter gave “such as I have” (Acts 3). It may be significant beauty in scripture is most often associated with holiness, and there is a relation between these things and Hephzibah (wife of Hezekiah)/Beulah (Isaiah 62).
Brief Chronological Record …
Protocol and Honor
The National leadership/ministry present was welcomed and given an open door on behalf of the Alabama host and state-level pastoral and ministry leadership present. Desiring to honor the Native American leadership/ministry leaders present (both from Oklahoma and Alabama), there was an exchange of gifts in the Native tradition to welcome, acknowledge, and honor the Native nations as the host people of this land. The gifts to the Native leaders were hand made clay crafts – fashioned from natural Alabama clay from Wetumpka out of the Coosa River, right by Fort Toulouse (a well-known site from which unjust decisions were made by governmental authorities regarding the Native American nations and their forced removal). They were given of the Land of Alabama as rightful and legal stewards of this Land in God’s sight (for there was not a legal transaction that gave us ownership as in other areas, but rather a forced removal to Indian Territories west of the Mississippi).
Righteous Judges and the Courts
Representation of righteous judges from past and present generations had a unique role – judges who have stood for what is right at great personal cost and sacrifice. John Horton represented judges of former generations — his grandfather, Judge James Horton, presided during the infamous Scottsboro Boys trial (in Decatur). This was one of three landmark American trials in our nation’s history which in the early 30’s exposed the racism and bigotry of the Deep South internationally, led to two Supreme Court decisions, and paved the way for the Civil Rights movement. When 9 young black men were wrongly condemned to death, Judge Horton knowing the verdict was unjust, overturned it, declaring a mistrial, costing him his political career. Judge Roy Moore, Chief Justice of the Alabama Supreme Court, representing judges standing for righteousness in this generation, delivered a profound discourse on the course of our nation, our heritage, and the present judicial crisis (Isaiah 1:26-27, Micah 6:8, Amos 5:24).

A Cry for Justice and a Call to Stand

The RAIN – The REIGN
Worship shifted to, “Let it Rain,” just before Dutch Sheets spoke, who was very greatly encouraged by the witness as the LORD has spoken to Him regarding Alabama, “I want to RAIN in Alabama.” and then afterward also, “I want to REIGN in Alabama.” The summary being for Alabama (1 Kings 18, and Judges 6-7):

3) As with Elijah, that Alabama is a WOMB of the nation, and the rain must be birthed.

4) As with Elijah, in reaching this place there must be a rebuilding of the altar of the LORD.

5) As with Gideon, there is a tearing down of the old altars (of Baal/Asherah = Remnant of Past Injustice).

6) As with Gideon, the wood of the Asherah/Idolatry will be the fuel for the fire of the LORD’s altar and a true offering.

Special note: In the week that followed this meeting, Mary Fagan shared how a young three year old boy knowing nothing of these things, looked up and said on a perfectly clear and beautiful day, “It’s going to rain ON ALABAMA. It’s dirty right now, but it’s going to rain.” – Hallelujah, Out of the mouth of babes! (Ps 8:2)

Hezekiah and Nehushtan
An admonition came regarding “nehushtan,” the brazen serpent lifted up in the wilderness by the direction of the LORD in the days of Moses that became an idol to which was offered incense. The summary being for Alabama (2 Kings 18):

1) Beware of this, especially in the bible belt, true worship exchanged for mere religious form and appearance.

2) As with Hezekiah, Alabama is intended to be more than a forerunner, but more specifically a REFORMER.

3) Worship would be a key part of the strategy at sites of injustice (38 in particular through Alabama).

4) As with Hezekiah, as a reformer, Alabama would be given a voice.

5) Beware not to stop short or allow this to be aborted – don’t start strong and not finish well (remember Gideon and his ephod).

State-Level Round Table
In association with this gathering was also be a meeting of twenty-four leaders from around the state of Alabama representing diverse ministry focus, ethnic background, geographic area, and streams within the Body of Christ to help discern the spiritual landscape of our state so we may better understand where we are, and where we must go. It was a time that allowed a glimpse into some of the unique gifts in the state, helped build relationship between ministries and city leaders, and enabled us to begin to question how can we come along side one another ministry-to-ministry, gifting-to-gifting, and city-to-city to see God’s heart concerning the state of Alabama fulfilled.

Judicial Intercession
The LORD had specifically put upon Jim’s heart (without knowing anything else about the two days) the words, “judicial intercession,” relating to pleading a case or cause whether with God or man (Isa 43:26). The ministry of Obadiah (1 Kings 18) was emphasized in faithful unseen service, hiding and ministering to the prophets, to protect and keep the word of the LORD from being cut off in those days. An encouragement came to not despise the hidden place and secret place where the LORD is doing His work whether in or through you, whether seen or unseen. It is the LORD’s way in bringing to birth what is seen by others as “sudden”.
Gates of Justice in the South
The LORD had specifically put upon Dr. Bigpond’s heart (without knowing anything else about the two days) a very strong sense that that the Gates by which God would desire to usher in Justice to the nation were in Alabama and the Deep South. There was a strong exhortation and challenge to understand authority and ranking, especially in the area of responsibility and calling (whether in gifting, geography, or otherwise) in relation to these things, and to determine the “rules of engagement.” It is significant that this vision (of ancient Gates of Justice, here to be opened in Alabama) was committed to a Native American whose people were forcibly removed from this land, and against whom such great injustice was committed. The LORD knit hearts together as he expressed to us, “Ninzo De Tah Yute” … “you are like a river to me, and without you I could not exist” (Yuchi tounge – of the Creek nation – and from this area).
Written by John Buhler – Alabama State Coordinator (2003 – 2007) – Alabama Strategic Prayer Network (AL-USSPN)

This artwork was created by Prophetic Art of James Nesbit, and is available online for many of the states from the 50 State Tour here: 50 State Tour Artwork

50 State Tour
The Chronicles of the 50 States 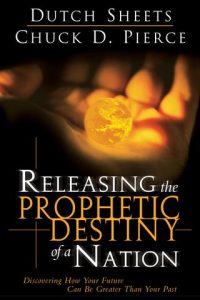 Releasing the Prophetic Destiny of a Nation

At the same moment, God issued a separate call to two men (Chuck Pierce and Dutch Sheets) to travel the 50 States in a call to prayer and mobilization focusing on our nation state-by-state in what became known as the 50 State Tour. Releasing the Prophetic Destiny of a Nation is the chronicled account behind the 50-state roadtrip and the focus that emerged for (or during) each statewide gathering. It is available many places, but for your convenience I have included two links here: